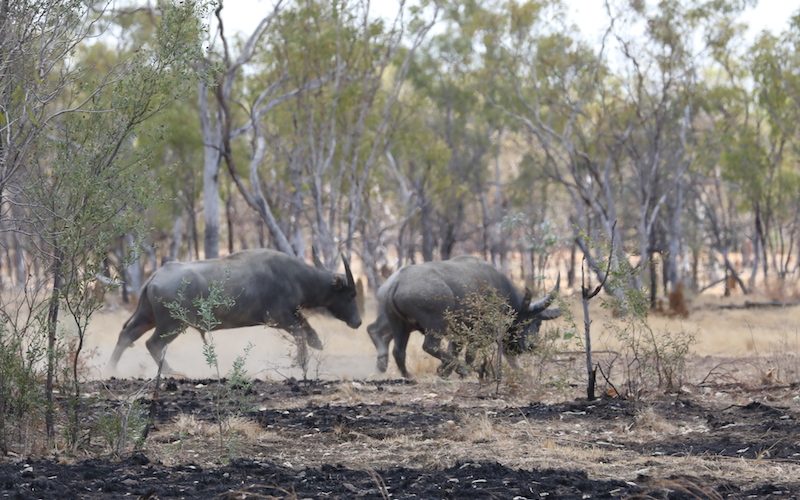 The history of the water buffalo

In the early 1980s it was estimated that the Northern Territory had approximately 350,000 water buffalo. Although they were largely seen as a feral animal, the buffalo were still utilised for their hides, meat and as live export. In 1982, Tuberculosis was a great concern in Australia and was found the be passed from bovines like cattle and buffalo onto the humans. This concern caused the Government to pass a Policy that allowed for the extensive culling of water buffalo. It was called the Brucellosis and Tuberculosis Eradication Campaign, in which buffalo were culled to minimise the risk to any surrounding cattle or humans of contracting Tuberculosis from buffalo that had the Mycobacterium bovis bacteria.

Because of the sheer size and power of these animals, it is recommended that when hunting them you use a minimum calibre of .300 min mag paired with a 180 grain projectile.

Water buffalo thrive in hot, humid conditions. They spend most of their time in wallows, swamps and marshes trying to keep cool in the heat.

Although they are classed as ferals the water buffalo can also be beneficial; they eat mostly aquatic plants some of which being invasive species themselves. They water buffalo help to keep waterways clear of these invasive plants such as the E. crassipes.

Male water buffalo reach sexual maturity around 2-3 years old, whereas the females can start as early as 13 months. They can mate year round which means one male can impregnate up to 100 females a year. Their rate of reproduction can, however, be dependant on the weather; in years of great heat and drought their reproductive rate may decrease.

The water buffalo has a gestational period of around 11 months and you can expect the mating behaviour to continue until around the 12-13 year mark in males.

Water buffalo were introduced to the Northern Territory between the 1820s and 1840s from Indonesian islands. The buffalo were hunted for their skin and meat around the 1950s, this was then used for export and local trade.

In Australia, their only predators are the salt water crocodiles that share the swamps with them and the occasional dingo that will try for a calf.

Because of the small number of predators and the high rate at which the buffalo can reproduce, hunting has become a viable way of controlling the booming population. With many hunting charters in the Northern territory taking advantage of the large numbers and contributing to the population management.