About the Cape Giraffe

The Cape Giraffe or the South African Giraffe is a sub species of giraffe found in South Africa, southern Botswana, south western Mozambique and southern Zimbabwe. Although iconic to Africa, the giraffe have been depicted in artwork throughout history; from the rock art of the South African San people to Egyptian hieroglyphics to Chinese paintings dating back to the Ming Dynasty.

There is a lot of confusion in the media on the status of giraffe, and whether they are endangered, threatened or in healthy populations. The source of this confusion is a combination of misinformation and trying to answer a complex situation with a single answer.

Throughout Africa, there are nine sub-species of giraffe inhabiting 22 of the 54 countries in Africa, yet most articles refer to giraffe as a single species and generalise declines rather than outline which species is in decline and where those species are most threatened.

According to the IUCN Red List of Threatened Species, giraffe (as a whole) are listed as vulnerable due to a steady decline in overall giraffe numbers over the last two decades (from an estimated 106,191 mature individuals in 1985 to an estimated 68,293 in 2015).  But when you look at this report in greater detail, you see that some species are declining in some areas, and that overall population sizes can vary widely.

Two sub species (the Cape Giraffe and the Masai Giraffe) account for around half of all giraffes living in Africa, while the other seven sub species live in smaller, fragmented herds, with some species numbering less than 1000 animals.

Overall, of the nine sub species, four are increasing in size, four are decreasing (with two listed as endangered) and one is stable.

Of all the species of giraffe, the South African Giraffe (Cape Giraffe) is listed as a species of least concern, with an estimated 27,000 in South Africa alone, growing by 300 percent from a low of around 8,000). Around half of those are privately owned on game farms and ranches, with CITES stating there is a direct correlation between the increase of privately-owned game farms and the increase of giraffe (and other game) populations. 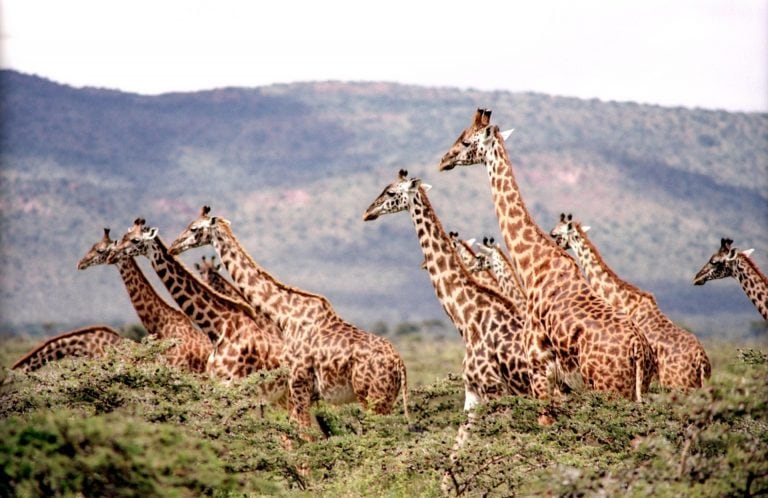 Giraffe have many unique characteristics making them stand out from other animals: from their sheer size, unique markings, ossicones (horn-like protrusions) and unusually long legs and neck. They are the tallest mammal in the animal kingdom walking around at a massive 4.3 – 5.7m (14.1 – 18.7ft) – that’s roughly the size of 3 men standing on each other’s shoulders. The average weight of a giraffe bull is 1192kgs (2628lbs) and a giraffe cow weighs around 828kgs (1825lbs).

The Cape Giraffe is a light tan colour with rounded or blotched spots covering it body. These spots can range from reddish-brown to black in colour. Contrary to what you hear in the media, a black giraffe is not a rare sub species. It’s simply an older male, as the coats on all male giraffes naturally darkens with age. The darker a giraffe is, the older it is, which is generally a sign it is well past breeding age. 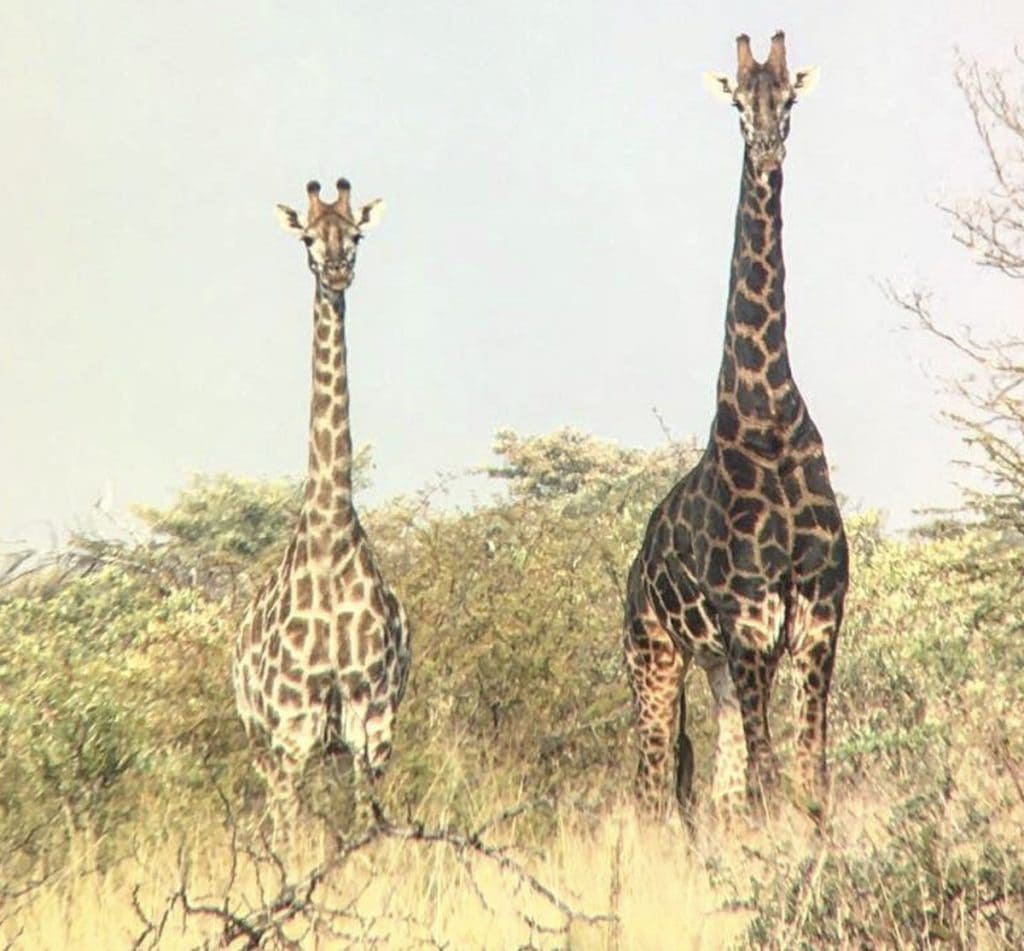 Giraffe have large eyes located on either side of their heads, giving them great all round vision. They have a large purple/black tongue that’s around 45cms long (18in) and adapted for grasping leaves and other foliage from tall trees.

Both males and females have ossicones (horn-like protrusions) on their heads, which are covered in fur. Males use these when necking (fighting), which causes the tops of the ossicones to become calloused and lose hair. Females and young will often have hair on the tips of the ossicones. This can sometimes help you determine sex from a distance. Males also have large, predominant lump between their eyes and below the ossicones, which is formed from calcium deposits in their skull. As they get older, these deposits become more pronounced, making their heads heavier and giving them an advantage in battle.

Giraffes usually congregate in small groups separated by sex, although you may occasionally find younger males with adult females. As they age, males become more solitary, and may be found with one other male or a small group of females.

A giraffe’s life span is quite long compared to other animals, ranging from 15 – 40 years. In the wild, their life span is between 15 and 25 years, while in captivity, they generally live between 32 – 40 years. Their longevity is due to a couple of factors: superior size, eyesight, and hearing. They also have a very powerful kick and very few natural predators. While a hyena might take on a baby giraffe, only lions will tackle a fully grown adult giraffe, and only out of desperation.

As distasteful as it might seem, that means humans are often called in to remove problem giraffe and older males that threaten the younger members of the herd – and to generally regulate the size and make up of herds.

Adult giraffe can sprint at a speed of 60km/hr (37mph) and can sustain a gallop at 50km/hr (31mph) for several kilometres.

There’s a lot of controversy around hunting giraffe, but it’s important to keep things in perspective.

While the species, as a whole, is considered vulnerable, all animal species need to be managed to ensure bloodlines are regenerated, problem animals are removed (before they kill younger giraffes) and numbers are maintained at a sustainable level.

Let’s put that into perspective: In the 1980s there were only 250 privately owned giraffe in South Africa. In less than 40 years, this number has sky-rocketed by a whopping 5300 percent to 13,500.

There’s also a lot of people that believe hunting giraffe is unsportsmanlike, citing their enormous height and colouring as playing in the hunter’s favour rather than the giraffe’s favour.

But hunting giraffe is no easy task. They have exceptional eye sight and hearing, very thick skin that allows them to disappear into thick bushes and acacia thorns without being harmed. Giraffe are extremely flighty, and will take off at the slightest sign of danger, and are capable of running at speeds of up to 60km/hr, giving them a much greater speed advantage than any hunter on foot.

Their substantial height also gives them a great vantage point to see danger coming from a long way off, which all combines to make them a very challenging animal to hunt.

Only a very small number of giraffe tags are released each year, and these are carefully chosen to maximise herd health and ensure the conservation of other giraffe’s in the herd.

For anyone considering a giraffe hunt, remember that they are considered big game animals, and require appropriate equipment capable of handling their large size.

For firearm hunters, you should use a rifle calibre of at least .338 WM with a 250gr bullet or larger.

For bow hunters, you will need a draw weight of at least 70 – 80 pounds, and use an arrow of around 700 – 800 grains. Bow hunters will also need to use a fixed blade broadhead, get within 50 – 60m of the animal, and carefully aim their shot to go between two ribs.