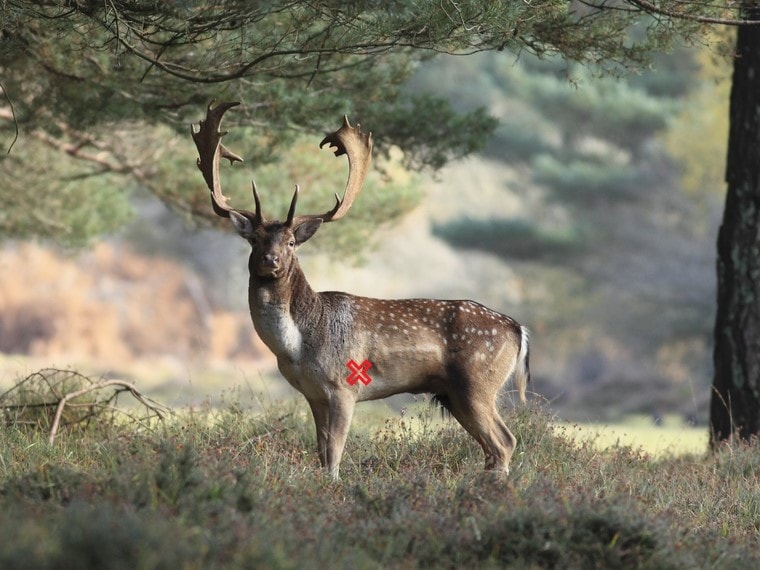 History of the fallow deer

The fallow deer are one of the most unique deer species with their antlers growing moose-like palms. They display a variety of colours in their coat. Red and brown are the most common variations, but they can also be found in both pale fawn, almost black and white colours. Some individuals also have white spots scattered over their coat.

The fallow deer originated in southern Europe, Iran and parts of northern Africa. An early introduction of the deer to Sweden is thought to have led to the modern-day European fallow (Dama dama). This is distinct from the original subspecies (Dama mesopotamica or Persian fallow deer), which is approx. 35% heavier and has slightly different antlers with its palms growing closer to the base of the antler. This subspecies is now believed to be extinct in the wild with a semi-captive herd of 850 deer being the only remaining population.

Over the centuries, the fallow deer have been introduced and reintroduced to numerous regions around the world. Today, there are free ranging populations of fallow deer in Europe, the United States, Canada, UK, New Zealand, Australia, the West Indies, South America, South Africa, Madagascar and Fiji.

The species is not threatened globally, in fact they are often classified a pest due to the damage they can inflict on native flora and fauna. In many areas, they do significant harm to native vegetation, forestry regrowth, agricultural crops, farm irrigation and property fences. As well as native species, livestock can also suffer, especially in the drier months or during droughts, when the deer add pressure to limited feed and water reserves.

Adult fallow deer are one of the smaller deer species. Males are approximately 85-95 cm tall at the shoulder and weigh between 60-100kg. Females are smaller with an approximate shoulder height of 75-85 cm and weighing between 30-50kg.

Rifle calibres of .243 and above are recommended for hunting fallow deer due to their smaller body size. They have very keen eyesight and hearing making them a challenging species to hunt.

Fallow deer have an annual breeding season called ‘the rut’. This period of heightened sexual activity occurs in Autumn for approximately 6-8 weeks. During the rut, the males call to the females with a croaking sound. This makes it a particularly good time to hunt fallow deer, as the older males are more active and can be found by listening for that distinctive croak.

Outside of the rut, males will live in small bachelor herds while the females and their young will form their own herds. During the rut, however, the male deer separate, becoming quite territorial, and will fight each other for land using their antlers. They can continue to be aggressive toward each other until late-winter.

The males shed their antlers in Spring, growing an entirely new, larger set by Autumn of the next season (just 5-6 months).

The gestation period for fallow deer is approximately 8 months with most young born in the summer months. Typically, females will give birth to just one offspring. The mother will hide her fawn in the early stages only returning to nurse it once every four hours. Fallow deer fawns achieve independence at about a year old.

Fallow deer are a highly adaptable species and will live in a variety of environments including shrub, grasslands, pasture and forest. They do prefer areas where there is some cover for shelter adjacent to improved pasture areas like farmland.

Fallow do not occupy a large home range with the average land covered being approximately one square km. This does depend on the availability of food, shelter and the pressure on the animals. Consequently, their range increases by about 50% during the winter months.

Fallow deer were one of the first deer species introduced to New Zealand for hunting. There are now 8 species that have established herds across the North and South Island. The first release into the wild was in 1864 where a small herd was liberated near Nelson. Today the largest herds exist in Wanganui on the North Island and Otago on the South Island.

The different regions where fallow can be hunted in New Zealand are each responsible for their own management of the licensing and permits.

You can find out more information about hunting fallow deer on public land in New Zealand on the Department of Conservation (DoC) website.

The fallow deer was originally introduced to Australia in the 19th Century as game animals by European settlers. They occur both in captivity, where they are farmed for meat and antlers, and in the wild, where they cause significant damage to the environment.

The species occurs in scattered herds all the way from South Australia up the eastern seaboard of Australia to the southern parts of Queensland.

Hunting is a viable form of controlling feral populations of fallow deer. Each state in Australia is responsible for its own regulations around the management of the species, with some imposing a season and licenses requirements to track the impacts.

You can find out more about the state regulations through the following links:

There is no season or game license requirements in QLD. Fallow deer are considered a pest species and as such can be legally hunted by any individual with a current firearms license and the landowners’ permission. You can find out more information here.

Much like QLD, the ACT has declared fallow deer a pest species and can be hunted without a game license. It is important to note that hunting is not permitted on public land in the ACT. You will need access and permission to private land to hunt fallow deer there. You can find out more here.

Hunting in South Australia is regulated through a permit system. You must have a basic hunting permit to hunt feral species such as rabbits, goats, foxes, pigs and deer. For more information visit this page.

Hunting fallow deer in Tasmania is restricted to an open season with bag limits. You can also apply for a crop protection permit which allows the harvesting of deer year round (with the exception of the open season). To obtain a game license you must hold a current firearms license from an Australian state or territory. For more information about bag limits, license requirements, and how to apply, visit this page.

The property that we have available for hunting fallow deer in Tasmania is exempt from the regulated season. Deer can be hunted year-round and there is no bag limit. Contact us for more information.

To hunt fallow deer in Victoria, you are required to hold a current Game License from the Game Management Authority. There is no bag limit for fallow deer and the season is open year-round. You can find out more, including how to apply for a Game License, here.