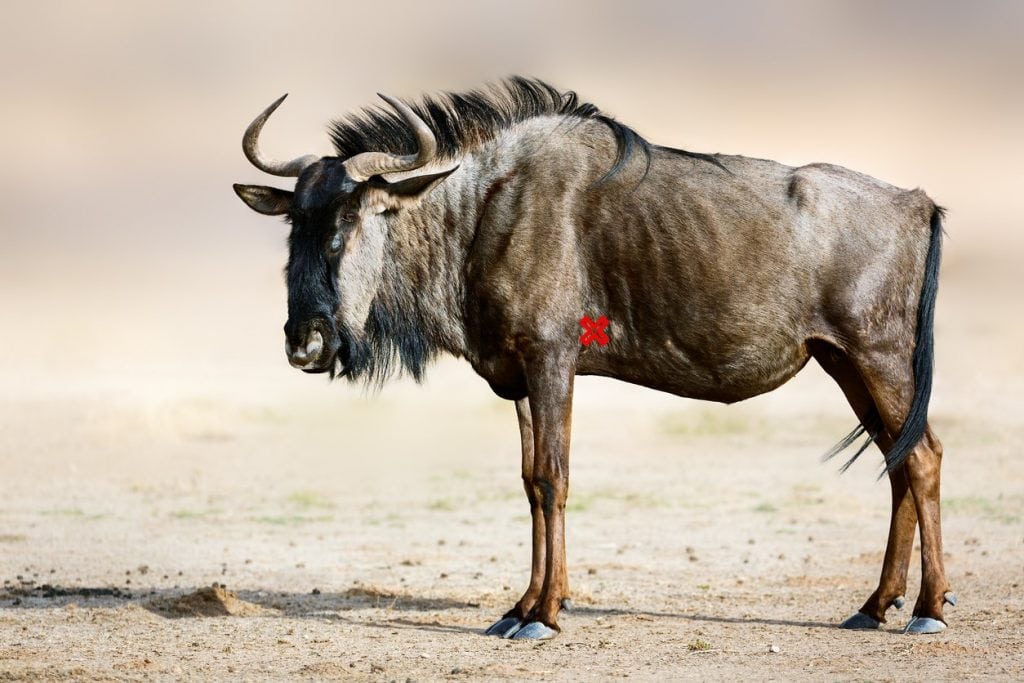 Botswana, Mozambique, Namibia, South Africa, Zimbabwe and most of Zambia except in the Luangwa Valley.

About the Blue Wildebeest

The Blue Wildebeest or Common Wildebeest is one of two species of wildebeest found around the world, the other being the Black Wildebeest.

Also called the Poor Man’s Buffalo for two reasons, firstly being it’s resemblance to the Cape Buffalo and secondly, because they have been found to be just as tough as it’s angry bovine relative.

The Blue Wildebeest species of Least Concern by the IUCN Red List of Threatened Species. The species currently consists of over 1.5 million animals spanning from Angola on the west coast to Tanzania on the east then all the way down to South Africa.

Almost 84% of the wildebeest population are located in the Serengeti. The population is currently stable and widely distributed across southern Africa.

Blue wildebeest have black tails, manes and faces, some can present a white ‘beard’ running from the chin to the chest. Adults coloration can range from bluey-grey to a greyish-brown with some even being a very deep slate colour. Whereas young are born a more tawny brown coloration.

Horns are present on both sexes, making identification when hunting harder. These look quite similar to that of the Cape Buffalo growing outward then curling back in toward each other. However the wildebeest don’t possess the large bossing on the head like the buffalo.

A few factors to telling the sexes apart are body size, horn size and coloration. Males will be bigger, darker and have bigger horns. This can be quite difficult to see when looking at a big herd to blue wildebeest. Something to note with the wildebeest is it’s larger front quarters. These can be quite deceiving when it comes to finding shot placement. 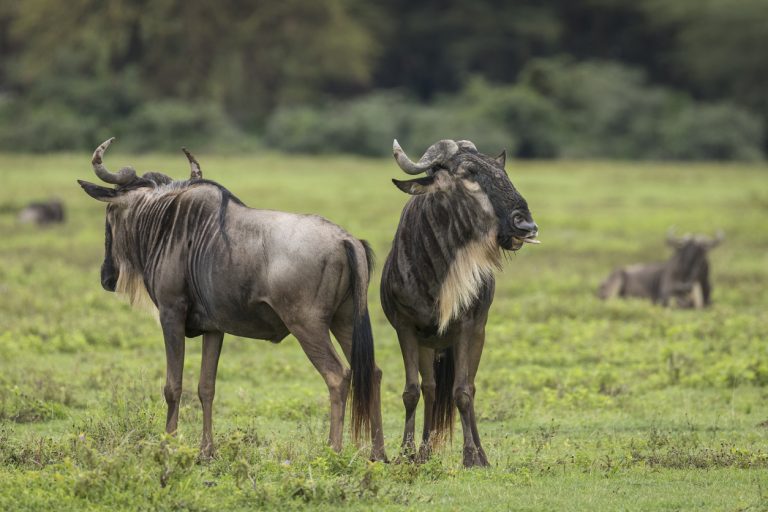 Like the nyala, blue wildebeest are mainly active early morning and late afternoon, they will rest during the heat of the day. By nature they are a very wary, most of their time is spent grazing and moving.

At around 4 or 5 bulls become quite territorial. This makes them loud and very active, in comparison before this stage they are quite lazy, not much activity and not much interaction with other wildebeest. Although territorial you will often find bulls near each other, and not many hold permanent territories. Herds can consist of a few thousand wildebeest, this helps them when it comes to their predators. Wildebeests main predators include lions, cheetahs, leopards, African wild dogs, hyenas and crocodiles.

Mating season usually happens around the end of the rainy season and will last for about 3 weeks. Interestingly studies have shown The Rut to commence on a full moon most of the time. This is when you will find not only the animals in great condition because of the increased foliage but also very active and extremely territorial.  Males will fight for dominance and the approval of females, you will often hear them bellowing and grunting and see them rubbing their horns on the ground.

Because the distribution of blue wildebeest is so wide it’s difficult to place them in just one type of habitat, in saying that across the board they do enjoy short-grassy plains boarding thicker bush. They will usually be within 15-25km of a water source.

Some of the African Wildebeest populations partake in annual migrations that are dictated by the seasons. 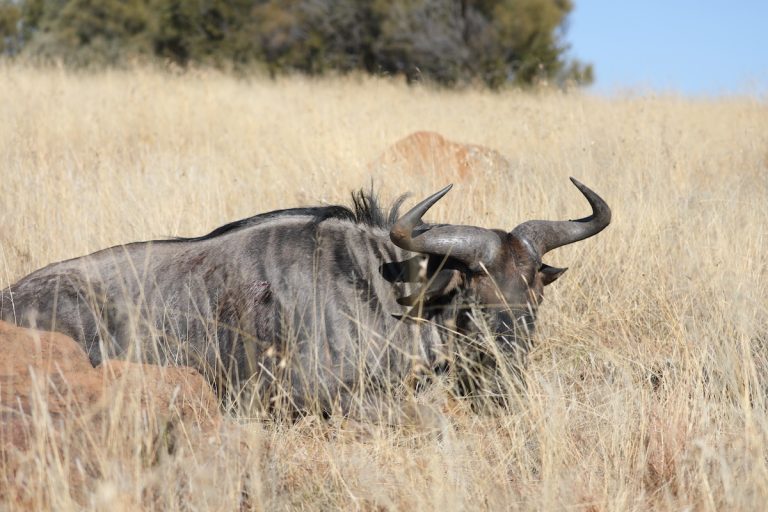 Blue wildebeest can be hunted in Botswana, Mozambique, Namibia, South Africa, Zimbabwe and most of Zambia except in the Luangwa Valley.

The recommended minimum calibre for a blue wildebeest is a .270, in saying this we have been advised by Professional Hunters that these animals are very tough and the bigger calibre the better. Blue wildebeest and plains zebra are two of the toughest plains game animals and the most common animals to have to track and take a second shot on. This is why it’s very important to make sure your shot is right and the gun/bow you are using is big enough for the animal. Recommended minimum draw weight is 70lbs for the same reason with an arrow weight of at least 450gr.

Something to note with blue wildebeest is their tall front quarters. Their vitals sit quite low in their chest cavity leaving a lot of room at the top of their torso that doesn’t have any vital organs. This is why it is advised to shoot them lower than you may think.